Ah , Sunday. I only like to do things I want to do on the weekends rather than things I have to do. Inevitably I often spend the second half of my Sundays preparing for the week to come. Anything from catching up on laundry to making grocery and to-do lists and cooking for the week ahead. Also- Sunday night is often breakfast for dinner at our house. After a whirlwind weekend of socializing over large meals and  sometimes eating out, we are usually ready for a peaceful “breakfast for dinner”. Yes, I realize we are grown ups and this is a kid concept but it can totally be translated into a mature meal. So if you’re thinking of pancakes, think again. 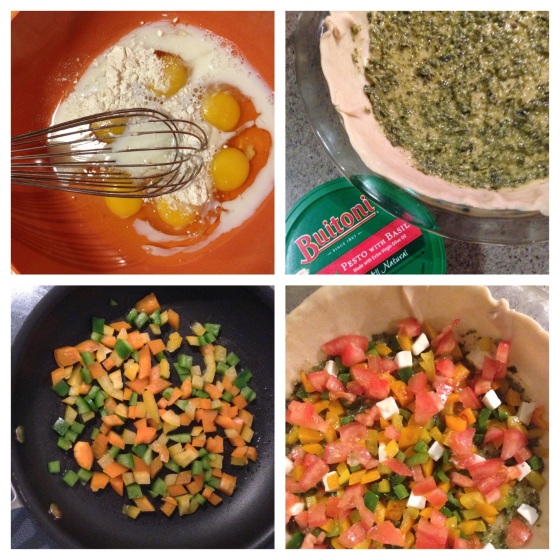 Confession: I don’t really have a recipe. Don’t you hate that? I switch it up often depending on what is in the fridge and goes together. But the base is the same every time.

-Press a pie crust into a pie pan. This recipe can be done without crust, just grease the pan well.

-Next comes the “use what you’ve got” part. For this week I spread pesto (maybe 2 Tbsp-ish) along the bottom of the crust. I also had a few bell peppers that were on there way out. If I didn’t use them soon they would be wasted. So I diced them up (probably made about a cup worth) and tossed them in a pan with a Tbsp of hot olive oil. I stirred them around a few times and let them roast up until the were tender… I didn’t think having a big crunch in the middle of a smooth quiche would be good. Plus, it always brings out more flavor in peppers when you sauté them. I also threw in a tomato because I thought it would go well with the pesto. Other veggies that I’ve tried in this semi-recipe that worked were grilled zucchini, fresh tomatoes, sun-dried tomatoes, onion. Asparagus was a flop and I wish I would have tried some squash this fall and have toyed with the idea of salsa. Toss all veggies into the pie crust.

-Next add cheeses to the bottom of the crust. Here I have cubed fresh mozzarella. Feta, goat cheese and even cream cheese have proven to be good as well. It didn’t have a ton of mozzarella left so I also added a half cup of shredded mild cheddar to the egg mix.

-Pour the whisked egg mix over the contents of the crust slowly… you don’t want to move everything at the bottom and end up with a drastically uneven spread of ingredients.

Honestly, I pair this with a sweet wine or mimosa and a fruit bowl. It can also be served with sausage, bacon, hash browns or even pancakes (eh emm… Hubby). It also makes for great left overs cold or hot so I grab it Monday morning for breakfast or pack it for lunch. Just one less thing to think about on a Monday!

I’m not saying the last 21 days have been easy... but I don’t hate watching these two embrace their time together.
Sound on
Felt the peer pressure. Bought some toilet paper.
7th annual gingerbread smash
Our little saleswoman is hard at work selling Girl Scout cookies again this year! She even made a commercial. It’s a little late since she was sick most of this week. And there’s a blooper reel coming too because we had so much fun doing this together. Olivia is taking orders several ways: -Order in person! Just let me know and Olivia can call, FaceTime or come to your door to take your order! We take PayPal, Venmo, cash and check but do not collect until delivery in March. -order in person to donate cookies to girl scouts of America charitable partners benefiting veterans, food pantries and those in healthcare! -order online for in person delivery (in March) -order online for cookies to be shipped directly to you! Word on the street is these shipments are arriving in a matter of days- so if you want them ASAP this is a great option! -order online to donate cookies to veterans, food pantries and those in healthcare -wait to find Olivia at a local cookie booth at Kroger, Lowe’s, etc. I will post locations and dates when I have them. Cookie booths take cash and credit card! See our selection, prices and order at the LINK IN BIO