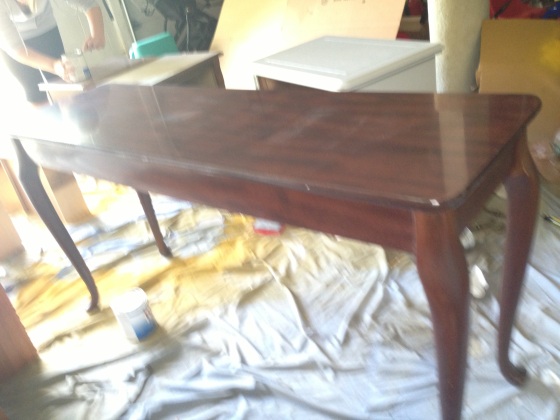 In the fall I found this sofa table in a good old fashioned curbside rescue. I had been driving around to keep O cool and happy during a long, hot soccer tournament. She eventually fell asleep. Of course that’s right when I discovered the sofa table waiting for me on the curb. Picture me trying to smuggle the table into my car without waking her. I moved two car seats and had to fold down one and a half rows in the Pilot all without waking O. Now picture me hoisting this beast into the back of the car all by my lonesome… Again, without waking the baby. The funny part is that I went through all this with absolutely no idea where I was going to use the table. In general the style is a little too formal and traditional to mesh with most of our decor. And the dark finish had seen better days and the rolling feet and bowed legs were less than modern. But there was something about it… Perhaps the fact that it had no price tag? I had to have it.

It sat in the garage for months (obviously- it’s July). I don’t think I ever got a decent before picture until I started sanding it. I often walked by it thinking about the possibilities, or lack of, that it had in our home. A couple of times I even considered curbing it myself. Hubby liked that idea best of course. But recently I have been trying to bring more order to the guest room (more on that later), so I suddenly imagined it serving as a desk/vanity/tv stand. Does that even make sense? Maybe not just yet but hang with me. The room is snug… And that is a generous description. I’d guesstimate it to be 8’x10′. So every single piece in there needs to serve a good purpose, hopefully multiple purposes. Without a full plan I decided to start painting the sofa table because it would need some love no matter where it was going to end up. And I just had to get it out of the garage.

First I sanded like crazy because there was a ton of sheen to break down on this thing. Then I whipped out a recent impulse purchase: liquid deglosser. I had heard great things and given the hard to sand rounded edges I had to deal with I figured it was worth a try, especially at $7 a bottle.  A $7 mistake is okay with me.  And if it was a bust I had only tried it on a free table with no real hope to begin with.

After all that sanding and deglossing I still had to deal with a laminate top. Why !?!? I had hoped the sanding and deglossing would do the trick but I wasn’t so lucky. Enter: my trusty friend Kilz primer. Primer was already necessary since it was going from dark wood (now sanded) to a light painted finish so I gave it a go on the laminate top as well. Result? Win. I highly recommend a coat or two of Kilz primer on anything laminate or “unpaintable”. Worked like a charm for me. I used two coats to be safe. Then I grabbed a cream color of the Sherwin Williams sample quarts I had from my friend B (it’s an exterior paint that she had used to sample her wood shingle sided house before deciding on a delicious gray color. I kindly saved her from having to kitty litter and toss a half dozen sample quarts and she unknowing funded my freebie crafting obsession.) 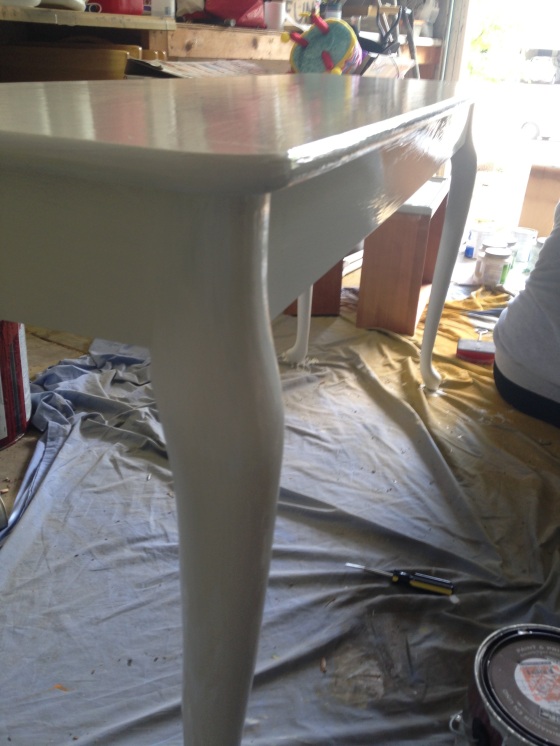 Sand, degloss, two coats primer, two coats of paint. In the end I was left with a more “yard sale chic” version of the starting point. I painted the hardware to the faux drawer (easier than flawlessly filling the holes) with bronze spray paint. The end result was a pleasant surprise.

Here it is as the desk/tv stand/vanity in the guest room.  See what I mean when I say the guest room is snug? I plan on wrangling the cable/internet wires, finding a stool or ottoman to tuck underneath. Lookout for an actual post on the guest room. It really deserves it.