Hubby was happy to help by ironing (Psst- He does all the laundry and I fix most things around here so he was concerned when I asked him to “preheat” the iron. Apparently only ovens preheat).

The first installment is the family room. I love this room. It’s calm with tons of natural light, soft gray and cream tones, wooden topped coffee table and (dare I say?) sexy stripes and it’s tv-less to boot! So far it’s been mostly white, gray and cream in here. Hubby says it reminds him of California. I’ve worked in a couple of subtle blue and teal ikat pillows and a gray and yellow pixel painting I had made but other than that we lack much accent color. I thought the orange will be a fun layer if color to add so I whipped up a pillow from the fabric.

I had an unused throw pillow hiding in the guest room and figured I could use the fabric to make a new cover for it. One problem: I don’t own a sewing machine. I’d be doing this by hand.

I used the pillow I would be covering to loosely guesstimate and trace a template for the squares I’d be sewing together. 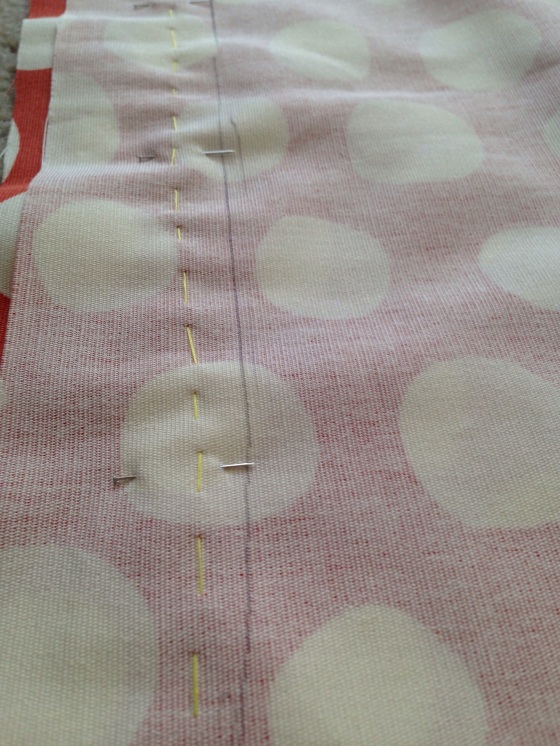 Then I pinned about an inch outside of the square to allow for the volume that the pillow would take up. I quickly sewed three sides of the square with thread. I mean… I sewed so simply that this could easily be a kids first sewing lesson. Nothing fancy here and I only need the pillow for decor. It’s not like it will be used in a pillow fight or anything.

After I sewed the three sides I slid the pillow inside the envelope I had created. Perfect fit. But what to do about my fourth side? Surely my remedial stitch job couldn’t be hidden. I haven’t the slightest idea on how to do that.

In true Hilda fashion, I decided to embrace it. Not only would my stitch show but I would make it bright blue and hope for it to become a fun accent detail. I pinned the raw edges of the fabric inward and did a “whip stitch” (at least that’s what I’m calling it) with the bright blue thread. Here’s how it turned out.

And here is the happy dotted pillow in its new home. I’m loving how playful and contrasting it is. Are dots my new stripes?

2 thoughts on “Dots On The Couch” 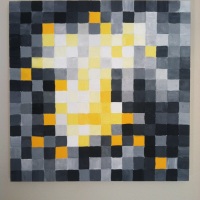