This might be my favorite project to date. I found this vanity out on the curb on trash night in my own neighborhood. I really have no shame.

As you can see, it was too cool to pass up: unique shape, abundant and tasteful details, spindled legs, and I had been searching for a new desk (ours is a Target POS). The person throwing it out helped me load it into my car… the entire time they made sure I knew all of it’s flaws: broken and missing veneer, one wheel didn’t roll, “musky” smell and so on. I saw these things too. But I also saw potential. I saw solid wood construction, drawers with dovetail joints, insane detail and lots of function. And for $0 I really had nothing to lose. If I redid this and it was a bust then I would be out a few bucks for hardware or something. But then it sat in my garage for a while because other projects took priority and I still had to convince Hubby of the potential this piece had in our home. His rule is that something (furniture or really anything I collect) has to leave before anything new can come in. And he doesn’t hate the junky desk we have as much as I do. Or maybe he hated the dumpster dive vanity more than the junky desk?

I don’t blame him… the before photos are a little scary.

As you can see, the drawers were in particularly rough shape. After I removed all of the hardware and wiped the entire vanity down with my homemade all purpose cleaner. Twice. Trust me, it was needed. Then I took the broken or cracked veneer off of the drawer fronts. Only 2 of the drawers needed the veneer removed. The other drawers had what I call “stable” pieces of veneer… meaning they weren’t damaged beyond repair and didn’t even begin to peel up when I tugged on them. I removed the veneer by prying a little with a screw driver and a spatula. Everything pretty much popped right off. Wear eye protection when doing this… lots of dust but also the possibilities of small chips of veneer flying into your face. I speak from experience.

I really didn’t have a plan for this desk besides painting it an off-white or soft gray color. I had been itching to try to make my own chalk paint and this seemed to be the perfect opportunity. Like I said, I had nothing to lose. From everything I read, chalk paint is easy to work with, requires little to no prep work and easily lends itself to distressing. I found quite a few different variations of the chalk paint “recipes” online. But they all included the same ingredients at varying ratios. I chose the middle-of-the-road recipe.

Mix 1/3 cup Plaster of Paris with 1/3 cup cool water. Add 1 cup of any interior or exterior paint. Blend until smooth.

I used the remainder of a Sherwin Williams sample mixed with a splash of white trim paint until I had my desired creamy sort of color. Yay for custom paint mixing! At first it doesn’t look like enough paint, but I promise it covers well. I did 2 coats with this batch and still had paint leftover. 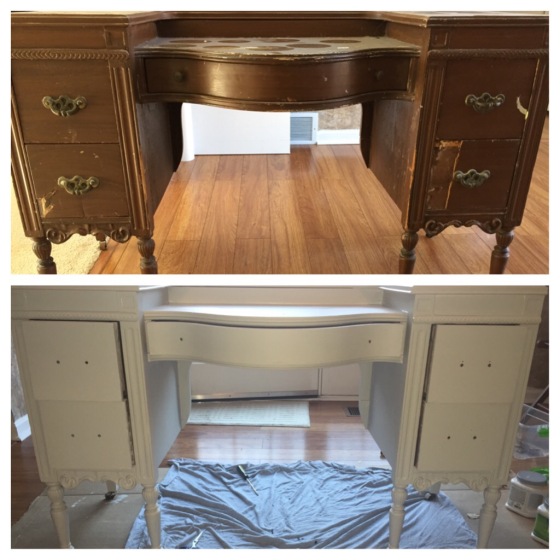 I feel like after a couple coats of paint this looks like a way more expensive, classy piece of furniture. I think it even stood a little taller. But I wasn’t finished. Now began the labor intensive aging and distressing stage. First I “glazed” the carved details, spindles and so on. I just brushed on a dark watered down paint mix and wiped it off until I achieved the look I was going for. Then I was left with the picture below.

I headed to Home Depot to see what to do for new hardware. Originally I envisioned glass knobs and nickel handles. But Hubby convinced me to keep the existing hardware and spray paint it with “Oil Rubbed Bronze”. He rarely has an opinion on my projects. Well, unless he disapproves. And then he’s very vocal about it. But I went with the ORB spray paint instead of new hardware and Hubby has earned major points for his taste! 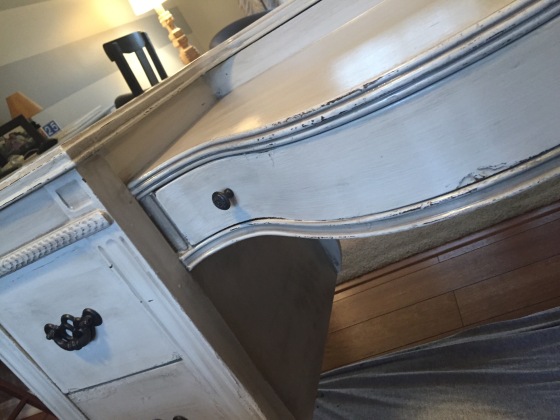 Once I was happy with the distressing and overall look, I put 2 coats of semigloss poly-crylic seal on it to protect it and give it a little shine.

I had been so excited about this project and posted on Hilda’s Facebook about the process of fixing up this vanity. The pictures were popular and brought on many comments and even offers to buy it! I was surprised, since I had pulled it from the trash that suddenly it was a hit item. I was devastated when I placed our computer on it only to discover that it didn’t fit. And the scale of the vanity/desk was way off in our already snug family room. SADNESS!!!! I racked my brain with other uses but I truly have no other practical use for it. After some thought, I decided selling it was the best option. I had at least 12 hours into this project and a lot of love. I had only purchased the Plaster of Paris, ORB spray paint and poly-crylic ($30 tops). 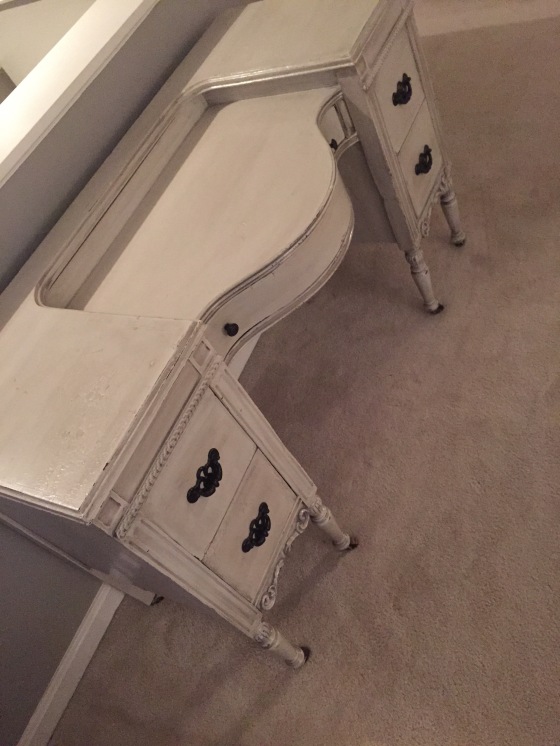 I mean, she’s just gorgeous. Like a furniture version of Pretty Woman. Or Cinderella. Luckily, the buyer is a friend of a friend and I know she will love and care for this vanity just as I would. I even painted the sides of the drawers in a soft pink for her which was a fun little touch.