Ah, April. I’m so happy to see you. And thanks for bringing our old pal Sun. I’ve missed you both. March was a “lion” in so many ways. We bounced between snow storms and 60 degree days and back again. And my migraines followed. Oy. O started talking even more… I’d say she has about 20 clear words. No walking yet but she constantly babbles to her toys and in her carseat. Pretty much everywhere. Even in her sleep. Yes, my 16 month old talks about cookies, the dog and her friend Z in her sleep. Cute, except for that if she’s talking then I’m not sleeping. In addition, I had an entire week off of work. While the kids frolicked in the sand I was busy at home with projects for Hilda. I did a bunch of little things and a few larger projects and they will all be posted as I write them. For now I have a handful of things that I’m just loving. They made my day, sometimes even my week. Here are a few of my little treasures. 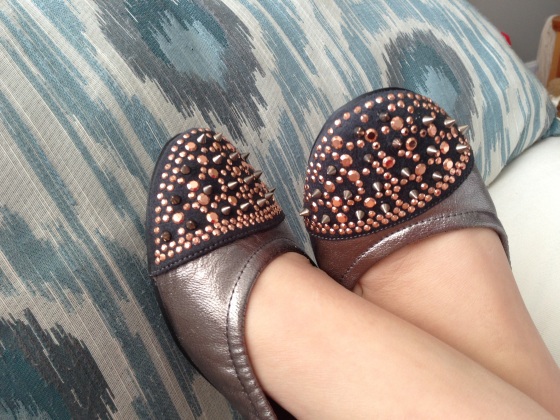 Shoes. What girl doesn’t love shoes? Even O is into them. She finds shoes all over the house or in the mudroom and brings them to me saying “Schlooes!”… She’s totally my kid. These are a recent Target find (Surprise, surprise). I am always looking for work shoes that aren’t flip flops, Nikes or Uggs. Most of spring and fall I live in flats. They just slip on when my hands are busy with baby, bags, dog, keys and door. I also love that I can toss them on with just about anything: jeans (skinny or otherwise), crops, skirts etc. So easy. I need easy in my life anywhere I can put it. These babies are a pewter tone with a black toe covered in rose gold studs and some bad-ass spikes. I’ve been asked by the 7 year old not to wear these when we play kickball.

This is the gorgeous St. Xavier Catholic Church in Cincinnati. Although I’ve attended many masses here as well as weddings, I’ve now also watched the St. Patrick’s day Parade from it’s front steps. I couldn’t help but admire all of this architecture from my seat on the steps. Incredible. 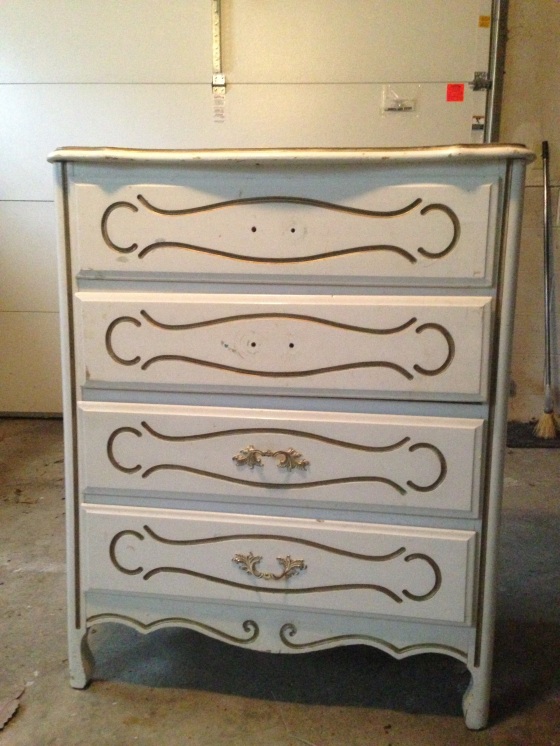 I’m not embarrassed to admit that this was rescued from the curb only a couple blocks from my house. In a heavy downpour of snow. Molly and I saw it, stopped in the middle of the road and reversed to grab it. Even through the snow we saw that it was a solid piece (dovetail joints!) and had beautiful shape and character. We carefully tossed it on top of my beloved stroller (cringe!) and brought it to the garage. This was one of my vacation week projects. And just you wait… the facelift is pretty awesome. 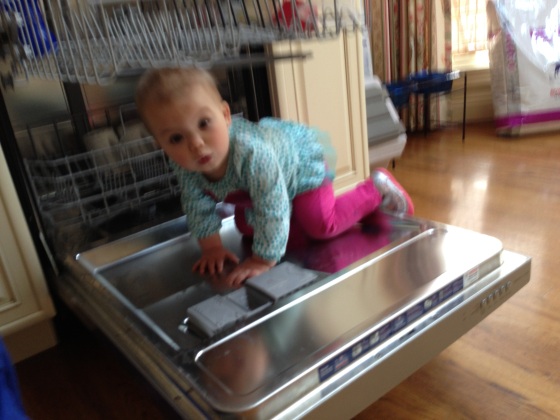 One of my favorite things is to catch O totally off guard. Her face is always hilarious. The other day at work, I watched from the other side of the kitchen as she examined the open dishwasher. She played with the racks and looked under the door and after much exploration I watched as she climbed on in. I whipped (I think that’s where the blur effect is from… the whipping action) out my iPhone and snapped a pic. Then I took her off and told her she can’t do that anymore. I don’t want to buy a dishwasher… especially for someone else’s house.

I shouldn’t have to remind you that I’m a big kid. Last week I was playing with Z and he was meticulously lining up all the lego action heroes. He very particular and takes it pretty seriously. These guys are like 2 inches tall. Batman and Robin are always side by side. And they both look so serious. And look at that Gotham City behind them!

Oh Em Gee. This is a spectacular creation I made as a snack (you know, to go with a glass of wine of course). I used Blue Oven Bakery’s Potato Rosemary Squares to make a grilled apple and goat cheese sandwich. It was beyond delish. Too bad it was my last square, but I plan on buying them again and creating a few more culinary delights. If you haven’t made it to any of their market locations (Findley, Clark Montessori and such) then you are missing out. I order you to go get a loaf of Bad Girl or Sourdough. Like, now.

A sure sign of spring is always in fashion. I found some great peach, deep mint and berry jeans on a run to Target and TJMaxx. They are often my first stops when trying a new trend I’m not sure about. Then I only spend half to see if I can swing the colored jean look. And by the way, I’m in love and I now believe that anyone can swing it. And if you’re scared just try a colored jean with a black top and a statement necklace. You’ll believe in yourself in no time.

On a quick run for coffee at Caribou I decided to stay and enjoy my cup near their fireplace. These little guys were on the mantle. How adorable! I want some for myself! No worries, I didn’t smuggle them home with me. I will, however, keep an eye out for something similar to use as winter decor next year. Maybe even add a red nose to one? He he. 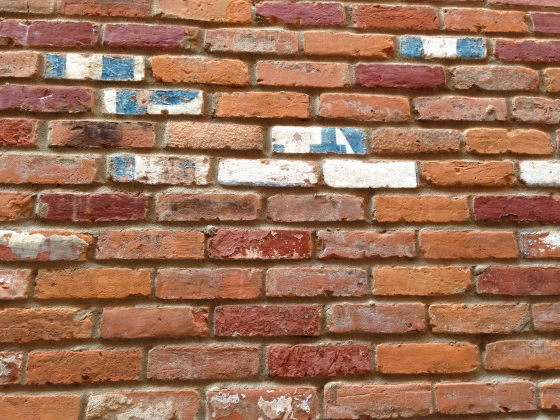 In an alleyway between Hyde Park Square and the pay lot I noticed these colored bricks. They are clearly remnants of an old painted building billboard from when the building next to it (that makes the other wall of the alley) didn’t yet exist. I’m thinking more than 80 years ago? I’ve walked through this alley countless times over the last 10 years and I’m shocked I’ve never noticed them before. How awesome is that old typography! Pretty cool.

Well I am Hilda Gotrocks. While I was working on a project bracelet I fumbled through some tumbled crystals. I forgot how much I love these. They are cool, dense and heavy in my hand. I just love the light they reflect and how much they resemble ice. An old favorite for me.

Holy water, Batman! This is more water than when our basement flooded. And we keep checking- it’s still dry.
I’m late to post out last day of school picture. In all honesty, I took it today. And she’s in her bathing suit. What day is it anyway? As you can see, she’s grown as well as chosen new glasses. And I have painted the door again (brighter). We can’t believe we have a 3rd grader! What a year!
We ate it too quickly to properly document ... but we are thrilled to be able to support one of our favorite restaurants again. Welcome back, Pelican’s Reef! The line was busy every time we called for more than 30 minutes so Rob went up and ordered in person. And it was so worth it.
Puddle jumping. ☔️
School parade tonight! We are so grateful for our amazing school, faculty and staff and the entire Sherwood community. It was chilly but worth seeing so many people (at a distance) who love and miss our kids. I teared up a bit. 💚🏹💚
Last month I ordered a case of 504 pieces of sidewalk chalk... because apparently chalk is a hot commodity. Don’t worry, I split my shipment with a few friends. Olivia and Gigi are using it plenty. 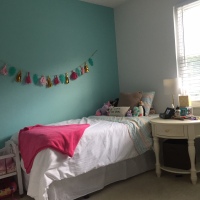